I’m getting to release a series of EPs that ultimately consist of a bunch of explorations of different DAWs and music making programs. The first, or 0st, of them is a “cover” that I did of Octavia Butler’s Parable of the Sower using SonicPi. The text of the book is formatted more like a poem than prose, then it’s commented out while around it is SonicPi code that creates a sort of “soundtrack” of sorts to what Lauren’s character is talking about in her diary entry. 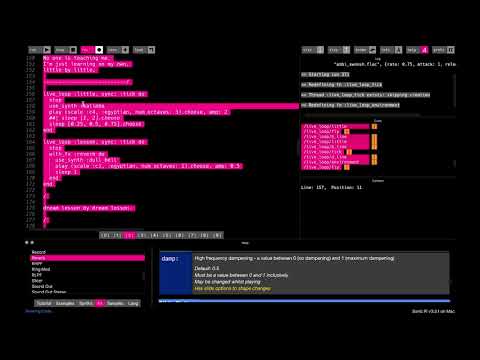 All-in-all this has been a super fun project, and this SonicPi set (which was my first real experience making tracks) was one of the best parts of the experience so far! The concept behind this EP as it fits into the rest of the releases is that I discovered this stream from a user named OLAMINA in an inter-realm streaming platform, receiving data from some one that exists in an entirely different reality than my own, leading me to realize that I too can send data between realities (which is how I’m reaching y’all in the Sun solar system from my own reality orbiting Sol).

If you want to support by purchasing the EP or follow to get notified of the next releases in the series, be sure to check out the album on Bandcamp!

This is an interesting approach! A cover of a book through music

That’s a cool project ! I really love this book, one of the most important read in science fiction I think. Almost prophetic

Thanks folks! Yeah, as a poet, I’ve been experimenting with this style for my own work since working on this.

And agreed @ChrisLTIR… The right wing fascist running for president under the slogan of “Make America Great Again” in the sequel always gets me. Makes you wonder what sort of predictions we would have gotten if the trilogy was ever completed.