Something I’ve been meaning to do for a long time. I got hold of an Adafruit MPR121 12 channel capacitive input board and connected it to a Pizero. Using the Adafruit Library and starting from one of their example files, I first changed things to run on Python3 then added OSC support resulting in a simple input device which can be used to send signals to Sonic Pi, where they can be used to trigger anything you like. I’ll tidy it up a bit, and then publish the details. It gives a pretty cheap way of getting external input to Sonic Pi. The board was £8 from The PiHut and I utilised a RasP.iO Prohat board to mount it on. It was fairly easy to add python OSC support and end up with a script which enables it to work with Sonic Pi on a local machine (you’ld use a Pi3 rather than a Pizero in that case) or to send OSC to an external Sonic Pi machine (which is what I did).

This project is something I’ve been meaning to try for some time, but have at last got round to doing so. It is a culmination of many other things I have done with Sonic Pi, especially follow… 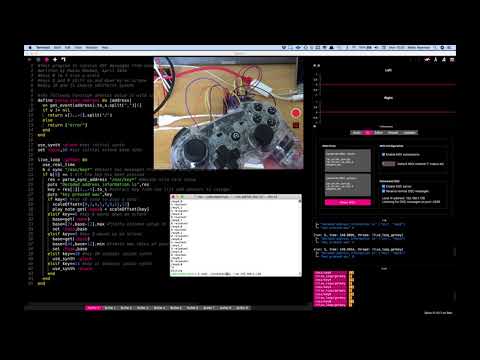 There are more than three files. show original