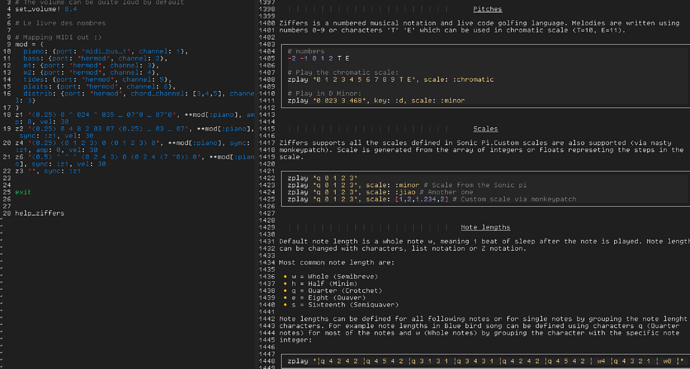 In the past months, I had very interesting conversations with @amiika concerning his Ziffers library. My live coding toolset being built around the usage of Vim/Neovim, I was encouraged to develop an alternative editor for Sonic Pi that I could use from the command line to test quick Ziffers snippets.

Sonic Pipe is a new command-line based tool made possible by the recent introduction of Sonic Pi 4.0. It is written in Python (> 3.9) and meant for users willing to play with Sonic Pi from Vim/Neovim. It can also be used as a regular Python library if you wish to use Sonic Pi in your Python scripts. Sonic Pipe can now:

The new version of Sonic Pi made it possible to run headless versions of the Sonic Pi Server to be used outside of the official/main GUI. This is one of the first tools (to my knowledge) exploring this new given possibility. Feedback is much appreciated! I hacked this tool for my own use, but I am sure that a critical eye and the action of new collaborators could make this tool even better!

It is now full of bugs and corner cases issues but I already use it for making music and for fun!

I could ‘pip install’ it on windows.
It seems to be restricted to vim/neovim.

So just form the git doc
i do not understand how to use it just for sonic-pi ‘play :c’.
Would you mind to give some help?

It seems to be restricted to vim/neovim.

It is not really restricted to Vim/Neovim but using it is recommended. To use Sonic Pipe, you are basically supposed to find a way to pipe text coming from a text buffer to the buffer containing a running instance of the script. I know that it is possible to accomplish something similar using Emacs or VSCode but it is currently not documented.

i do not understand how to use it just for sonic-pi ‘play :c’.

Sonic Pipe is not meant to be used standalone in the terminal just like the old sonic-pi-cli was. However, I believe that it is possible to write a script that will run some Sonic Pi commands. You just need to have an instance of the SonicPipe object running using a daemon like so:

having the code above in the script ‘run_play_c.py’ still fails to play
under Windows 10 with the follwing

I can’t read german but by translating it it seems that ruby is not installed on your computer. Sonic Pi may wrap its own version of Ruby. You will need to install it by following instructions for your OS: Download Ruby

After installing ruby (which is not said to necessary in the SonicPipe Readme.md)
I am getting the following on the cmd-Line when running the script
python run_play_c.py:

Where does this PATH come from?
I did certainly not specify it.
And have only the following in C:\

which is not said to necessary in the SonicPipe Readme.md

Yes, that’s for sure but I am warning users that the script is still very unstable and experimental for the moment. Errors were to be expected. It is also written in the README that Windows is Currently not tested and unsupported. I don’t have access to a Windows computer until the end of the month but I’ll try to make a new version that you can boot easily

. I would suggest looking for the alternative of running Sonic Pi with the very recent Neovim plugin that was posted on the forum a few days ago.

Actually inspired by the literate programming post
I was looking for a remote interface to Sonic PI to possibly run/play from a mdbook
edited code as in the mdbook example given there.
But this seems not to be easily available jet.

Possibly what you are trying to do with mdBook is possible for Rust code only? But not really sure what you are after.

I would be happy to have
a local HTML-based code-block editable browser-opened yarner-(mdbook)
similar to the linked mdbook-editor example (third paragraph)
with these three ‘undo’,‘copy’ and ‘run’ symbols in the source-code-box.

Then it would be very cool to press the run-icon and hear! and possibly
see the sonic-pi-command-line output from this script.

This would be great for tutorials / documentation / examples.

The thing is that mdBook was originally written to render Rust documentation. Therefore it supports these features for Rust. Adding them for SonicPI would be a lot of work, and would probably not included in the base repo.

Sure … mdbook is for rust and other languages but it sounded with your LP
experiment that you are quite an expert concerning mdbook especially
if you write a kind of wrapper(yarner) to it.

So I hoped that you possibly could easily advice, collect
or possibly integrate this kind of feature in your yarner distribution.

Probably I dream a little bit too much … sorry