RPi to use PulseAudio 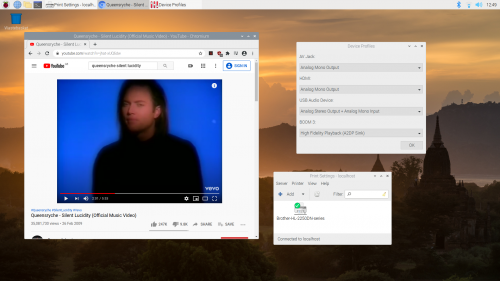 We've released a new update of Raspberry Pi OS — here's a run-through of the major changes.

They are changing to PulseAudio

“…Most users shouldn’t even notice the change; there may be occasional issues with some older applications such as Sonic Pi, but the developers of these applications will hopefully address any issues in the near future…” Hmmm

Are we still good on RPi?

Linux audio has always been mystery to me. I’m only interested in it working, not into poking about with it

I beleive the RP Foundation currently ship V3.2, with Midi and OSC disabled (?),
which somewhat limits it’s appeal to the larger spectrum of musicians. .

Robin (and others) have proved 3.3.2 (?) on recent releases, this may break it,
but I have no doubt if it does, it will soon be sorted and 'howto’s will be posted.

Nice of them to class SP as an ‘older application’ when it would take little effort
on their part to be offering the latest stable version.

There’s some history there I think, but perhaps it’s not my place to bring it up.

Thanks. I did pick up there was some history, and I thought this article sounded a little offhand.

After reading it, I did an upgrade of my RPi4 to see what would happen. What happened was that the upgrade failed and the unit bricked

One of the advantages of using a RPi for me was that it’s supposed to be a closed world - same hardware everywhere like Macs - if you go with the vanilla OS, then upgrades should be safe. But no, this reminds me of the early days of linux. Not that again.

Maybe I’ll reassess my ideas of using RPi’s as low cost units. I’m thinking that repurposed old Windows PCs might be less pain. What am I saying

you could also try Patchbox OS, which is an interesting choice if you use you Pi for audio - even if you don’t a pisound card. I recently purchased one (Raspberry Pi 4 in connection with a Pisound card) and so far it seems to be quite a capable system.

I have not yet installed Sonic Pi (Robin’s generously prepared version) but this should not be a problem.

I am sure Patchbox OS will not swtich to Pulse as this makes no sense because all key applications and audio and music production on Linux in general depend on Jack Audio Server.

thanks for the news.

notice that sonic pi is not officialy supported on linux. so use windows is not a bad choice concerning this point.

Sorry, this is slightly offtopic.

Haha, @nlb, de jure you are right but de facto for someone like me who is using Linux on a regular base for more then 20 years that’s like saying: sorry, regular mattresses are no more supported, only bedrolls guarantee proper sleep.

Actually in my opinion a software that calls itself ‘Open Source Software’ and does not - at least basically (as SP does) - support at least one open platform is somehow not really ‘Open Source’ because you just can’t run it unless you use closed source software. I know, that is not the strict sense of the term but its broader meaning according to R. Stallman (allthough - yet another disclaimer - certainly I do not agree with all of his views.)

Having said that: Of course what platforms are supported is entirely a decision of the one who puts the work into it, but I just wouldn’t use it anymore.

you could also try Patchbox OS

Thanks Martin, that does look interesting and I’m going to try it. There’s so many options for making sound at the moment, and I’m having fun exploring them. But I’ve also got to separate them into things that are interesting toys and things that are robust enough to use live. The toys still have a place in recording. I’m undecided about the Rpi at the minute.

Originally I thought that Sonic Pi might be in the ‘interesting toy’ category. But it turned out to be a serious ingredient - not for the reasons I thought at first.

I’ve always loved linux from the first. Coming from a hard-bitten Unix background originally, but then having to work on Windows which at the time really did feel like a toy(!) I was overjoyed with the linux initiative. That said, it can be a fiddle getting things to work eh?

With my IT hat on that’s great, but with my muso hat on I don’t want the fuss.

Very, very true. Exactly what I am bothered with since some time now. There are several aspects about that issue, such as:

… and probably more. And: I am also not entirely sure and have not yet any experience whether the Pisound is apt for live use.

When I was thinking about moving into electronic music last year, I had a look around and while the way to recording was clear, not so what to do live. My ideas are still evolving, but currently every question seems to be answered with - I can do that with SPi.

I started looking at hardware controllers like Arturia Beatstep Pro, but while it’s nice to have a dedicated hardware device, I keep coming back too - I can do that better and with more flexibility with SPi.

In that sense Raspberry Pi or Windows or Mac, is not really an issue. They are just vehicles. I liked the idea of the RPi as a simple, low cost and linux(!) device - that’s appealing to me. But it’s more philosophical than practical so I’m prepared to let it go

BTW (off topic but…) I’ve bought a Volca as an experiment, see how well that integrates into the setup. I’m sure there will be issues, but again I like the idea of a dedicated ‘block’ to add.

whether the Pisound is apt for live use.

i am a linux fan too but it was just to warn @soxsa that even if sonic pi actually works on linux (i use it), linux is not officialy supported.
but if you want to free a troll about mao on linux, it’s up to you :-). I just add to just feed the troll that it seems mao software are there but need some time to master them.
Cheers

Not entirely sure what you mean, but you can be sure or that: I wouldn’t wanna feed any troll. What is ‘Mao’? Quick googling: Is this a French Linux audio oriented distribution?

Sorry for the french acronym. MAO (Musique Assistée par Ordinateur) in french = computer music.
Forget about the Troll i was just kidding. By the way, as you mentionned Patchbox OS, do you use it ? do you think i can use with an focusrite external audio card the module modep https://blokas.io/modep/.
see you

Yes, I am quite sure. You will just have to configure the Focusrite (I did this before the Pisound arrived) as audio device, which patchbox os makes rather easy to do.

Currently I am using the Pisound as a sound source and am running fluidsynth and soundfonts (e. g. to have a Fender Rhodes sound available). It is possible to boot it without attached screen and automatically run an application such as Modep or Pure Data (e. g. with Automatonism). I have not yet figured out how to start and configure fluidsynth but that should not be a problem. You can control the Pisound via a multi functional push button, VNC, bluetooth app and/or TouchOSC but I am rather thinking of using it as a simple box which receives midi and returns sound.

I have some other components I would like to integrate: a hardware mono synth (example with SP sequenced Midi) and another Raspberry-based box running sequencing software (example with a sampling software called cheat codes controlled by a grid). In the center there will be my laptop running a live coding software (be it Sonic Pi or Tidal) which will/should be the master clock. Last but not least I have my guitar (I have recently begun practicing again) which I would like to use in future…

I am still very much experimenting but it is not only - and I guess only to the least part - a technical issue but rather a question of what music I want to make, where I want to code, to control sound or to play the guitar and how the different parts will work together to compose this music.

@Martin - OK I tried PatchboxOS and it failed in various ways. It installed but couldn’t start jackd - so no sound. I choose the PD module, but it didn’t startup with that either.

Then I tried installing Sonic Pi. Loads of dependencies missing so after going through all the apt-get stuff I got it to install, but when run nothing happened at all. No splash screen, nada, zip, nul, nempty.

I don’t doubt it could be made to work - and I like the idea of using a dedicated-to-audio OS rather than the general purpose one. Just saying it didn’t work right off.

That said…now I have my OSC->MIDI thing going, I’m going to take another look at PureData. My new setup calls for multi-voiced synths (one per midi channel) and seems that PureData can do that.

Helm is great…apart from…you can’t filter on the midi channel AFAIK so I can only get a single voice on one remote node.

I did spend an hour or so looking up various ‘solutions’ using jack, alsamixer, alsamidi. The system remains stubbornly as above. Looks like my goal of a Rpi-based live system is not going to fly. Back to Windows, back to the music

The only way forward with RPi is to properly understand Linux audio, that’s a good thing to do but will take a while.

Another take on this is that despite all this time and the claims I’ve read, RPi is still too DIY for prime time use. To be fair, that was the original idea.

BTW this is not an entreaty for someone to fix it for me.

Oh, a new word for me to learn

Sorry about the trouble. I have not yet tried to install SP on top of Patchbox OS.

But, you could use 2 RPis: one for Sonic Pi running on a previous version of the default system and another one running Patchbox OS with Pure Data. I honestly do think that for live audio (and all I plan) one RPi should only be loaded with one task (SP or Pure Data or Fluidsynth/Helm or animation aso.).

Nevertheless I do understand that such a ‘distributed solution’ might be a bit to complicated to control and you rather stick to one laptop doing all the stuff (though also there performance might quickly become a critical issue - especially with SP and in live context. See the recent Algorave where I spoted two or three systems being overloaded.

Yes it’s the ‘overloading problem’ I wanted to address with multiple nodes.

With my new scheme of working everything via OSC, I do need to run SPi on each remote node to translate from OSC to MIDI. It can be the silent partner - that’s fine. So currently I could have a single-voice Helm on each SPi. And have a neat stack of RPi’s.

I will continue to explore Rpi but (as above) things have to be on the A list or the B list. A=reliable, B=interesting

BTW I revisited the BeatStep Pro - to make sure I wasn’t simply reinventing the wheel. But no - what looked like WOW a few months ago, now looks PFFFF. Two melody step sequencers, as many as two? And one 6-channel gate sequencer for drums? And 7 different scale patterns? Wowee Zowee
(however you spell that)

So, there is a prize to be had getting this stuff to work.