I have been working on live coding a vaporwave set in Sonic Pi recently.
I finally have a 9 song set all worked out. Here is a video of the performance:

It got me thinking about creative release strategies, and I came up with this idea.
I can make all my Vaporwave releases Open Source Albums.
Basically, I create a git repo for each album.
-Each repo includes:
-A sample folder.
-A folder that has all the songs laid out in loops in separate files. All you have to do is run and play
-Another Branch off the master, that has all the starting live loops for each song, so that they can be
reconfigured and remixed as pleased, to fit your own A E S T H E T I C.
-I would create a remix folder, and allow others to commit to that remix folder with their own remixs of my
songs.

What do you guys think? Good Idea? Bad Idea? Worth a try?

A Repository of all my Vaporwave sets. I will constantly update this, as well as allow forking for you to remix my songs as you wish! - ThankMrSkeletal2016/RonovoRonove

Here is the Repo I am currently using. It has nothing currently, but I will be adding at least this single, along with all the other samples, by the end of the day. 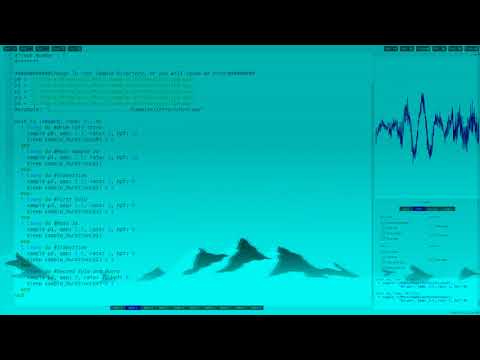 EDIT : The github is now set up with live_loops, individual song files, the full album runthrough, as well as links to the “visual album” version of the album. All the info should be in the Readme.

Cool ideas - I like the idea of a git repo for each track. It might be interesting to explore a standard format to save/load compositions for sharing. IIRC each save in sonicpi editor is stored as a git commit, but no one has had time to do much with that yet.

In terms of remixes - why not just use branches or forks of the song ? Instead of having a separate folder it seems you could leverage git’s features. This could lead to cross polination from multiple remixes (branches) in the same repo - the possibilities are endless!

Have you promoted your work to https://www.reddit.com/r/Vaporwave/ ? (I’m subscribed there but don’t always catch everything that’s posted) It seems like the perfect home for your ideas

Yeah. I have posted there. Getting up and down. Seems mostly encouraging, but it’s turmoil right now. It seems there’s an internal beef about the A E S T H E T I C S of 3D or some shit there. Subreddit drama. So there seems to be a lot of trolling happening. My original post in the producers feedback thread got completely buried underneath a flood of posts. But I’m going to continue pushing there.

I really like that idea. I wanted it in folders originally, in the master itself, and then just turn the whole project loose for anyone to fork off of. The master is protected, so I would have to approve the merge request, for quality control.

This is my first time really setting up a git repo from scratch, so I’m totally open to all suggestions. This is a new horizon for exploring afterall.

The idea is to keep a curated master branch that is a library of (currently just) my albums. But I envision a system of huge repos like a library, that allows people who start running with this idea to get exposure. I just first wanna try it on the scale of a single album. Once I get the next set/album ready, I’ll look into setting up the system to allow whole albums to forked off, and remix albums to be allowed to be committed back to master.

tl;dr : I wanna turn this into a label eventually.

This is a great idea! I didn’t realize there were other vaporwavers on here. I want to get back to this eventually and take a shot at a remix. I’m a bit busy working on releases for a few vaporwave labels right now as well as a videogame project but when I have a chance later this year I’ll give it a go. I know this is an older post but did you ever turn this into a label? I think it could influence the structure of how other labels work.

Lol. It’s really funny that you said that here. I"m actually on the verge of releasing the second album in the series, O T A K U 2, some time this weekend. I saw you followed me. Thanks for that! I’ll have the video up this weekend.

This new one has all editing and cutting done in sonic pi. Unlike this one, where I did a lot of processing and cutting in FL Studio before I put it in here.

Anyways, have my latest and greatest creation.

Awesome! Are you still planning on making it into a label?

Yes. Eventually. I just need to sit down and set it up first. The problem is finding the time.

But yes. The goal is this year, to convert that repo from a mess to a place that can be called a label.