Midi in events not triggering

I have a launch control and I’d like to pair it with sonic pi. I got it working on sonic pi version 2, but I don’t know what could be hapenning now. As you can see on the following image, the midi events can be seen on the cue log, but it’s not executing the “synth :piano” line.
Could I be missing something? 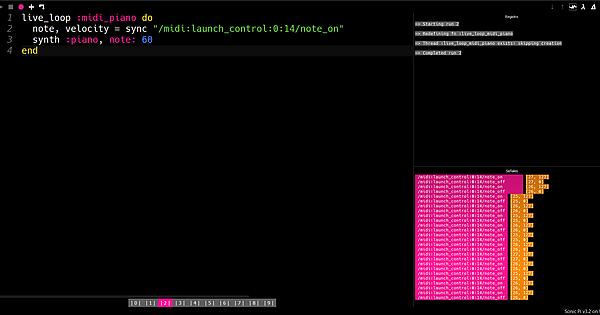 Could it be that you already have a live loop called midi_piano that was already syncing on a previous event that hasn’t been received?

Try pressing stop and then run again (or start Sonic Pi and try again if the app is closed).

No idea what’s going wrong at all. Do you have anything in your log files - specifically ~/.sonic-pi/log/server-errors.log or server-output.log.

Are you able to use sync with internal cues, such as those generated from live loops?

In case there’s something wrong with your audio, try changing it to

puts “got here”
instead of the
synth :piano,note: 60

See if that works first.

Hello Robin. I’ve tried with puts “something” too, but I’m not getting any message.

Super odd - these log files look absolutely fine to me.

Are you able to use explicit calls to cue and sync as expected?

In the first message I wrote that it was working on version 2. Obviously, this is wrong, because midi functions started on sonic pi 3. So, the working version I was using was 3.1. Now I’m back to v3.1 and it works again

I’ve just got hold of version 3.2.2 on Windows 10 and I’ve been working through the tutorial for the last few hours. I was just trying out the example in section 11.1 and I’ve just hit this issue, too. Midi events - I’m specifically looking for note-ons - are appearing in the Cues window, but the live loop doesn’t trigger. Everything else has worked wonderfully up till now. (I’ve been specifically interested in the threading/live loop examples.) Like the original poster, I tried moving back to version 3.1 and yes, this does work. I noticed in 3.1 that midi in events are named with forward slashes in 3.1 - “/midi/modal_002_48/25/1/note_on”, but in 3.2 there are colons - “/midi:modal_002_48:25:1/note_on”. Is this likely to be significant?

Also, I noticed with 3.2.2 that after stopping and restarting Sonic Pi all midi inputs are likely to have disappeared from the Midi Ports list in Preferences/IO. (Output devices are always present.) Restarting the PC will reset this. With 3.1 I’ve seen this happen once, but most times input devices show up each time I restart Sonic Pi.

I’m a longtime programmer/hacker, though not with this particular environment, but happy to dig in and help debug if given a few clues as to what to do next.

yep it’s normal. there is a change between these two versions.
Midi changes for upcoming Sonic Pi 3.2

Thanks for the reply. The code is just the example from the tutorial, section 11.1, modified with my own midi in port info and with an extra puts call for debugging:

Nothing appears in the log after the initial run info, despite fresh midi events showing in the Cues panel. (Screen shot attached, I hope.)

There is currently a bug in v3.2 when using multiple : in a sync path. This has been fixed on the main branch and will be fixed in the upcoming betas and next release. Apologies. Until then, you can use the * fix as detailed above to mask the error

I think the issues I’m having are to do with midi loops. I had been running loopMidi from Tobias Erichsen, which provides a way of sending midi between apps running on the same PC. I see from the Midi Ports list that Sonic Pi automatically opened the inputs and outputs of the ports that I had set up in loopMidi. Shutting down loopMidi and restarting the PC (I previously had loopMidi running automatically at startup) the example code that I posted previously now runs as intended. So, I have two questions:

Firstly, why wasn’t this a problem in version 3.1?

Secondly, is there a way of choosing which midi ports are opened by Sonic Pi?

This second feature would be great to have regardless of the current problem, as in Windows only some USB/midi drivers can be shared/opened by more than one app and once Sonic Pi has grabbed all the ports nothing else can use them (even when Sonic Pi doesn’t actually need them). This applies to any devices which use the Windows class compliant driver. (In fact I only have two devices out of about ten that have their own custom drivers, all the others have to use Windows’ own non-sharable class compliant driver.)

Secondly, is there a way of choosing which midi ports are opened by Sonic Pi?

sonic pi shows you midi ports available. Then you specify which midi port you want to send messages via the midi instruction options :

I often use loop midi with no pb at all.

Sorry nlb, that’s not what I mean. I know how the functions ‘midi’ and ‘use_midi_defaults’ allow you to choose where to send midi, but Sonic Pi opens all available ports regardless of whether you intend to use them. Just try opening up your Daw whilst Sonic Pi is running. All the class compliant devices will be unavailable because Sonic Pi has already grabbed them.

Sorry nlb, that’s not what I mean.

Ok sorry. would you give more details about your set ?

Ok sorry. would you give more details about your set ?

Here’s a screenshot showing midi ports not being shared. Hopefully you’ll see what my setup is like from this, too (though I’ve turned off most of it to simplify what’s going on):

In the background you’ll see that Sonic Pi has opened four usb devices. If then I load Reaper it reports that it can’t open three of them. These three all use Windows’ own class compliant USB/Midi driver. The fourth device is my RME Babyface, and that has a custom USB/Midi driver provided by RME and this is open properly in Sonic Pi and in Reaper. If I close down Sonic Pi at this point and click Retry in Reaper, all ports will be opened.

It is generally known that the Windows class compliant USB/Midi driver can’t be shared between apps. This is not a problem with Sonic Pi. The way that most apps deal with the situation is to provide a configuration mechanism for opening only those devices that you actually want to use within a session and leaving the rest alone. This is what I was asking if Sonic Pi could do, because it would make things much more flexible overall. For referene, Reaper’s configuration dialog looks like this, though a configuration script stored somewhere would be just as useful to me:

On loopMidi (and midi feedback potentially being a problem), after you said that you’d been using loopMidi without problems, I checked again here. This time I can’t find a problem with it either, at least not one that I can reproduce

I’m now back to not knowing why I had the problem in the first place. I’ll just have to keep trying things out and see what turns up.

Thanks for all the replies

thank you for your screenshots

to be honest i’ve never heard about

It is generally known that the Windows class compliant USB/Midi driver can’t be shared between apps.