Off and on with different coded music environments (SC, Overtone and SP) I’ve enjoyed the challenge of unrolling time linearly whilst from my music background I treat time more as a constraint satisfaction problem with recursive subdivisions: however many notes might be in the fill, you still have to nail the downbeat on the next measure, etc, and when I’m playing a physical instrument, I either feel the downbeat coming and hit or I don’t and miss. With SP, I always calculating times which correspond to the layout in time.

This reminds me of the GUI layout problem: in old school GUI toolkits you have to figure out absolute positions in pixels by hand, while with something Qt you specify the layout as a tree and the toolkit figures out the mapping to pixels.

but I wanted to try to get closer to how I feel time when playing e.g. jazz bass or percussion, and I was trying to find techniques to express something like a variable fill or ornamentation (with some probability) without having to explicitly compute the time intervals or worry about missing the downbeat:

I could imagine other algorithms based on trees or something more interesting, so I’d thought I’d ask around… any other cool ideas?

edit disclosure, I chose the basis functions using python snippet & plot like this: 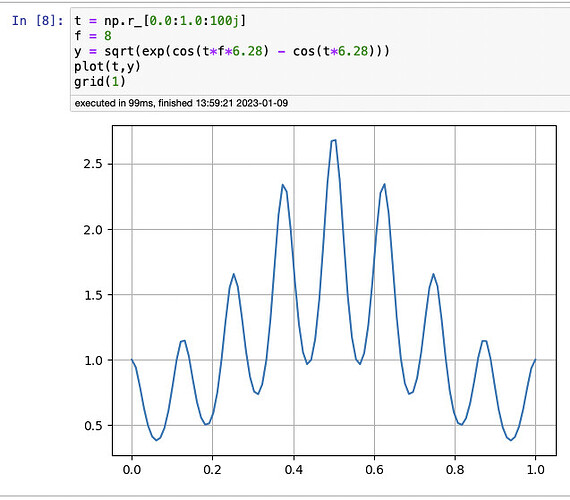 Have you played with time_warp at all? It lets you do stuff in its own time bubble before rolling back time as if nothing had happened.

Have you played with time_warp at all?

Ah from a quick read in the docs I thought this function just shifted time, I didn’t see that one can execute code inside with a rollback, kind of like a temporal transaction. Thanks for the tip, I’ll definitely play with this!